I recently read an application note by one of the big three semiconductor companies about a low EMI switching power supply. Normally, low EMI means that the Switching Power Supply IC has controlled slew rates on the power switch to lower the rate of change of the switching voltage to lower the high frequency content of the switching output waveform. This works very well and is a sure step in the right direction of making a EMI quiet design.

This application note showed some actual waveforms and I immediately spotted another source of EMI that was not addressed. The ringing that can be caused over the power switch or catch diode, or in transformer designs it can be exasperated by the leakage inductance in the transformer as shown in figure 1. 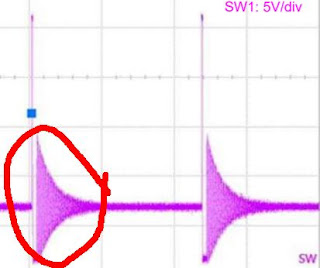 Figure 1 – Switching regulator noise is not just confined to the power switch rise and fall times. EMI is also produced by ringing waveforms as shown in the figure clipped from a semiconductor companies application note. This damped ring looks to be about 1 or 2 uSec period which would correspond to a 500 kHz to 1 MHz peak in the EMI signature produced by the design.

The ringing waveform of figure 1 may or may not be an issue in the final design, but I have seen many instances of otherwise well designed switching power supplies being overwhelmed by this type of noise, especially if it is to be used in any type of design that has an intermediate signal processing frequency band that is somewhere around the ringing frequency. For instance, a ring like this would easily be seen in the passband noise floor of my DSP based Lock-In amplifier [1].

The ringing is caused by parasitic elements in the Power Switch, Catch Diode and output inductor all acting together to to produce a parasitic ring. This ringing in a switching power supply is more frequent when the output inductor runs ‘dry’ or is operating in the discontinuous conduction mode (DCM). The reason being that when the inductor runs dry, the catch diode and main power switch both stop conducting and go to a high impedance state which allows the high frequency parasitic ringing to take place. The ringing is normally not problematic by itself and usually never causes any possible over voltage damage because it is almost always below the switching voltages anyway, so it is often ignored.

The instant the power switch turns on again the circuit impedance is immediately lowered and the ringing is stopped. In transformer based designs the ringing is usually greatly influenced by the leakage inductance of the transformer.

To show the ringing, I made a simple model of a buck converter power stage using Tina-TI [2]. I did nothing special and just threw together some appropriately sized components as shown in figure 2. Upon running the simulation, sure enough the ringing appeared right on que, as shown in figure 3. 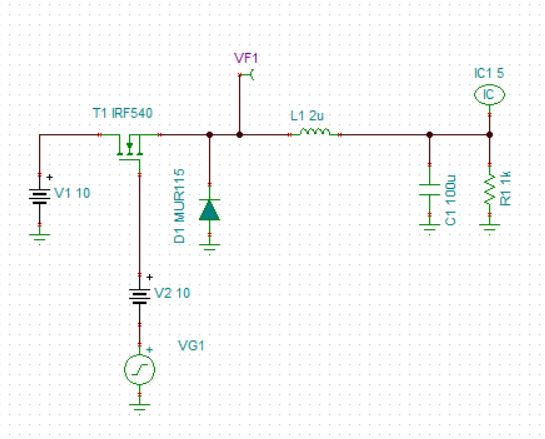 Figure 2 – A simple Tina-TI SPICE Simulation model of a Buck converter was thrown together to show the ringing. 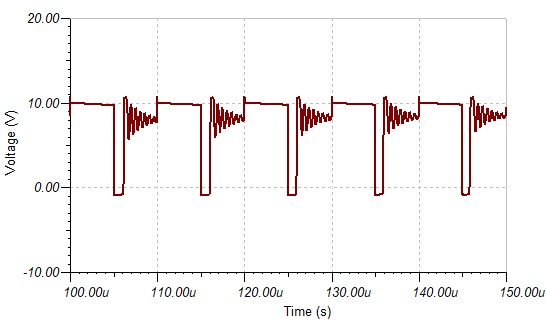 Figure 3 – A Transient simulation was run and on the circuit of Figure 2. The ringing appeared right on Que!


The solution to the ringing is as old as switching electronics itself. In old time ‘relay’ or ‘contactor’ switching circuits, to quench the parasitic inductance and capacitance of a contactor that when opened might cause a damaging spark, a circuit called a ‘Snubber’ was included across the terminals to add some controlled impedance that would counteract or swamp out the parasitic elements while at the same time be a DC block so that no steady state DC power was used [3].

In this instance we just need to add enough damping impedance such that the high Q circuit formed by the parasitic elements is damped much sooner than they would be naturally. We can’t always get rid of all of the ‘ring’ but we can sure keep it to one or two cycles at best, thus substantially reducing the EMI footprint.

The basic circuit was modified by adding two Resistance / Capacitance snubbers across the catch diode and the main power inductor as shown in figure 4. Simulation of figure 4 shows that the snubbers have done their job and have substantially reduced the ringing to around a single cycle and at a lower frequency as shown in figure 5. 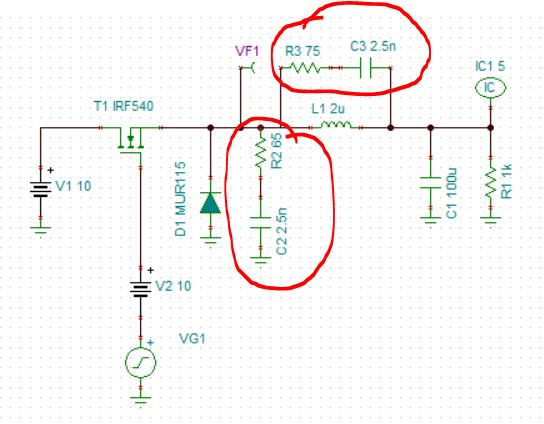 Figure 4 – Adding two RC ‘Snubbers’ in the buck regulator circuit can really control the ringing. Sometimes a single snubber will work and sometimes several are required it all depends on how exactly your circuit is designed, used, built and even on the layout. 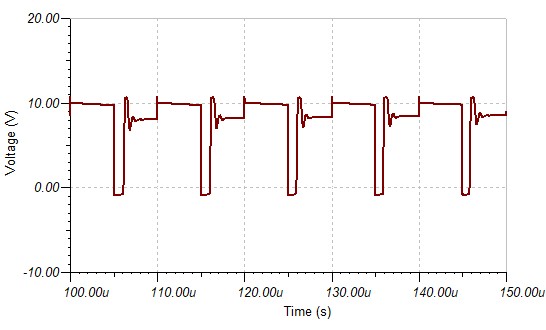 Figure 5 – Running a simulation on the circuit of figure 3 shows a vast improvement in the ringing which is now damped quickly in less than two cycles. This will obviously reduce the EMI footprint of the design.

I knew from experience what values to choose for the Capacitors and I iterated in on the resistor values to minimize the ring. This is actually easier with actual hardware than in software. On an actual hardware circuit I normally get a small, single turn potentiometer of 100 or 200 ohms and solder a reasonably sized capacitor to it (Here I empirically found that 2.5nF was the optimum size), then I tack solder this across the circuit nodes, all using very short leads. In ten seconds I can tweak the potentiometer and see the effect. If need be I can make another snubber by using the same setup and a different capacitor value. In just a few minutes I can have the circuit ‘empirically’ optimized [4].

Similar snubber implementations can also be used to mitigate leakage inductance induced overshoot on the main power switch in transformer based designs and across rectifier diodes to reduce the snap off that happens with diodes from their reverse recovery effects all of which can add to EMI issues with power supplies.

We have seen how the EMI footprint can be improved with the application of a snubber. What are the downsides? The snubbers add AC impedance to the switching nodes and as such they will add AC power loss to the switching waveforms. If a few milliwatts are not a big issue then there is no harm. If power is everything to you, then you have to be careful and carefully trade-off the EMI footprint with you tolerable power loss, which will require more time to optimize everything.

Taking it to the limit

In some killowatt switchers I have seen where the snubbers consumed 10’s of watt’s. This is a lot of power to just waste as heat, and the solution there was to take that snubbed power and add some small DC/DC converters to take that power and convert it back to the input or output circuits to aid in the overall efficiency. The snubber power recovery DC/DC converters are bigger in this instance than most of us use for our main power supply! Wild!

[3] The old company Sprague Electric used to make a marvelous array of ‘Snubbers’, one for every common use, some even with built in spark gaps, turning ‘snubbing’ into a true Art form. The term ‘Snubber’ is also used by fluid flow engineers to denote methods alleviate fluctuations and ‘ringing’ in fluid transport pipes.

[4] Yes you can find articles that will go into great detail on how to use circuit analysis to get to at least a nominal starting point for the values of the RC Snubbers, but since a large portion of the ringing is based on poorly specified or even unknown component parasitics, including the PCB layout and even the PC stackup, I find it easier to just empirically get the job done. Your: “mileage may vary” as they say, so approach the problem anyway you want – both will get to a solution eventually.

Note: This Blog does not use cookies (other than the edible ones).
Posted by Steve Hageman at 4:08 PM